This project, developed by the artist Ebony G. Patterson, seeks to investigate the performative association of gender through explorations of the masculine as it relates to popular Jamaican dancehall culture.  The project relates to an ongoing body of work that has utilized the performative, as mode for explorations of masculine ideologies that function within dancehall construct. These experiences however, were fabricated by the artist. Employing dancehall fashion, language and ‘actors’ who were instructed by the artist in various scenarios.

Given the youth driven nature of dancehall  the artist is working with 14 young men and exploring their own ideas about masculinity through fashion . Participants will be asked to design outfits based on these ideas/ideals. The artist will then have the outfits made and embellished, for the participants to wear and have their pictures taken in a embellished ‘photo studio’.   Posing and /or posturing as their idealize male. The ‘studio’ will be based in a Downtown, Kingston in  Jamaica .The photo studio space will be made based on a Georgian dollhouse structure, used in reference to the both the domestic and toys. Both object and space are important ‘tools’ in of understanding wider gender associations from an early age. All participants will keep their hand embellished tailored outfits along with a photograph of themselves in said outfit.

Participants will be documented in both clothing and space, photographically and also in video. The recording   of the project will be virally projected to the following  locations  – Jamaica, Trinidad, Barbados, Bermuda , Bahamas , United States and the web via Facebook.

This project is funded by the 2011 Rex Nettleford Fellowship for Cultural  Studies, and supported by the Multi-Care Foundation of Jamaica, a not –for- profit organization  working with youth from the inner city in the Arts and Sports.

If you’ve walked or driven by KMAC in recent days, you might have noticed something startlingly different about the museum.  While Sofia Maldonado’s paintings on the museum are not graffiti because it is not an act of defiance by an individual on a public space, her works illustrate one of the many ways in which a museum can interact and provide a platform for visual artists. West Main Street, Louisville, Kentucky became her studio for 3 days as she completed her work with the help of assistants.  Sofia, who hails from Puerto Rico and divides her time now between NYC and Puerto Rico, added text inspired by her interactions with people in Louisville as she asked for comments from passerbys.  Staff and visitors of the coffee shop across the street enjoyed seeing the work unfold real-time. Her work is also a form of performance or “artist as laborer working in Kentucky” that is specifically relevant in a process oriented craft context that defines the museum’s mission.

Artists interacting with the exterior of a museum space are not new to the artworld.  Christo and Jean-Claude wrapped the Kunsthalle Bern in a show curated by Harald Szeeman in 1967-1968, and they also wrapped the exterior and interior of The Museum of Contemporary Museum of Chicago in 1968-1969.  These acts question the framework of a museum as it becomes a large sculpture shrouded with tarp and rope.  In 2000 artist Shimon Attie projected An Unusually Bad Lot, on the ICA in Boston. One component of his exhibition was to comb the archives of the building and project the results from across the street during the evening hours.  The images were derived from the previous owner of the museum space, the Boston Police Department, and the criminals jailed there.  Attie memorialized past inhabitants that helped define the architecture of the art space with the idea that vestiges of previous functions are bound to define future uses and interactions with the public.

Similar to Maldonado, Attie’s museum became the screen for his artwork, but with Christo and Jean-Claude, the museum was the skeleton that held up the work. The museum was integral in the completion of the work. Visitors expect to view art and obviously, the museum interior walls help to display the works.  By painting on the windows of the museum in an unexpected public area, the museum is trying to question our expectations and convention which is an important reason for art and craft to exist in the first place.

Do you have any other examples of artists painting, projecting, wrapping or building on the outside of a museum space?

It becomes clearer every day that America is one big melting pot. The reasons people immigrate here are vast and varied, but the one thing that is clear of those who begin another life in the U.S. is that it will never be like their first home. They’ve been thrown “into the mix” per se.

The Kentucky Museum of Art and Craft opened its newest exhibition Into the Mix in the beginning of February. This exhibit explores the ways Caribbean artists search to find what is culturally authentic. This is also the first exhibit by Aldy Milliken, the new Executive Director & Chief Curator for KMAC. “Into the Mix, will be an excellent example of the return to Materiality for 10 artists that have a relationship to the Caribbean. By default, these artists are engaging in a debate of cultural stereotypes because they are often defined by a region instead of the large human issues of their practice such as politics, gender inequality, and cultural identity,” Milliken said.

This debut exhibit by Milliken is on trend with the wave of exhibits around the country that are expanding awareness of work from the Caribbean in today’s contemporary art world. Beginning In 2009, the most prestigious art show in the Americas, Art Basel Miami decided it was time to address why Caribbean artists, who make up a large portion of the population in Miami and Brooklyn are rarely given the opportunity to meet and share ideas about their work. The exhibition, “The Global Caribbean – Focus on the Caribbean Contemporary Art Landscape,” was initiated in Miami by Culturesfrance, the French Government agency for international cultural exchanges. Several of the artists that are featured in KMAC’s exhibit were also a part of The Global Caribbean shows.

Louisville is no Miami, but a few of the artists travelled to Louisville to spend the week prior to the opening preparing their work. They also worked with local artists and students to create collaborative pieces for the exhibit, and participated in panel discussions. If artists out in the community weren’t enough to garner attention for this show, Puerto Rican artist Sofia Maldonado painted her street art installation on the first floor windows of the Museum. She described her piece as “the storm. In Puerto Rico we’re used to tropical storms. There is a peace that comes after the rain and wind and it creates unity among the people there.”

Artist Blue Curry originally from the Bahamas, works with sculptural assemblage, installation and video. He considers his work somewhere between cultural artifact, tourist souvenir and contemporary art piece. For his Untitled (Tyres) piece he said, “The tread on the tire has a certain affinity with the snake skin, when you look at the snake skin up close. If you ask me ‘What does this piece mean?’ I don’t really have a direct meaning to give you or for each of these pieces but they sort of work with this idea of getting you to think about what you’re looking at and to think about it in a different way.”

Sheena Rose’s work can only be fully appreciated in person because stills of video just don’t translate the full effect of her creative animation. She uses hand drawn animation and combines it with photographs, transfers and comic strips creating a moving art picture. “Town to Town” is about the busy urban life style and experience of Bridgetown, Barbados (where she is from) and Cape Town, South Africa where she spent three months in an art residency. In her statement she says, “I want the viewers to get the chance to see my interpretation between these two towns. I am interested in the daily lives of persons and the idea of the space.”

Aldy Milliken is taking KMAC into the contemporary art discussion with this show. Into the Mix will be on display from February 4th through April 14th. KMAC is located at 715 West Main Street. 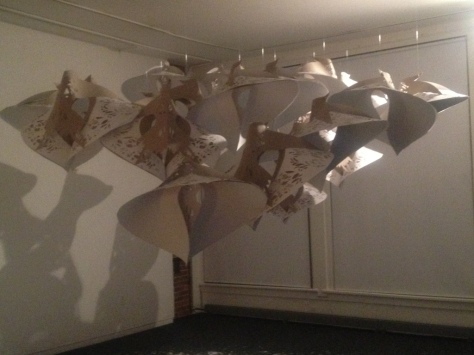 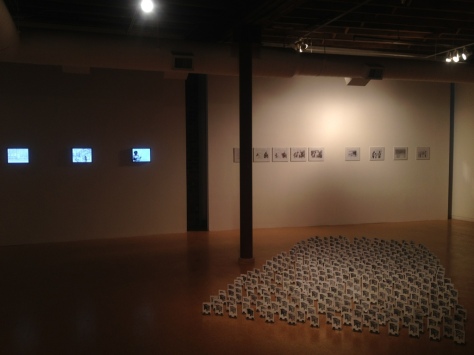 Sheena Rose videos and drawings with a Christopher Cozier installation. See you on Main Street.

Ebony G. Paterson, originally from Jamaica, is a professor of Art at the University of Kentucky.

ARC, a web-based magazine, is a great site for background information on contemporary culture in the Caribbean.